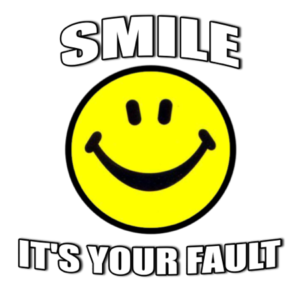 Did the adults in your life ever intervene when you had a conflict with another child? If your experience was anything like mine, you might have been asked questions such as “Who started it?” or “Whose idea was this?” How did those sort of questions make you feel? I think the first few times I was asked questions like these, I told the truth. But in short time, I realized the questions were a set-up. If I admitted that it was my idea, I would be blamed for whatever had gone wrong.

My role in my family was that of the scapegoat, and as such I regularly received the “credit” for anything which went wrong. It wasn’t a fun role but in some ways I suppose it made me feel special and important, though in a completely dis-empowered and demoralizing way.

Now that I am an adult I can still feel that old familiar sense of being at fault if anything goes awry. It is such a well worn emotional habit that I have to work really hard to overcome my impulse to take the blame and feel bad about myself. Fortunately I have learned many helpful ways to change these old tapes and free myself from the oppressive feelings. And I get to share those tools with my clients.

For instance, I often work with couples who have suffered an infidelity. In one such instance, the husband was sure his wife was to blame since she was the one who had the affair. And in many ways that was true. The affair and choosing to lie about it was entirely her doing. But the truth has many sides to it. I asked this couple to consider how the marriage had degraded to the point that the wife felt a desire to have an affair. This didn’t sit well with the husband as he really wanted his wife to “pay” for her transgression. In fact, he was so intent upon blaming and punishing her that it was difficult for him to focus on healing the marriage.

His anger and hurt are understandable. And yet, at some point we do need to disengage from our reactions long enough to decide how we want to proceed with our lives. In this particular case, the husband eventually learned to move past his rage and fully express his sense of betrayal and loss of trust in a way which invited a heart connection. The wife not only took responsibility for her dishonesty and made amends to her husband, but she dug deeper to discover why she felt the need to take a lover and lie about it. Although she entertained the idea that she might not want to be in the marriage, she eventually decided that what she really wanted was to feel safer to express her true feelings with her husband. She was able to move toward that goal by finding the courage to state her truth even when it might result in a conflict. As this couple learned more positive ways to express their feelings and assert their needs, the marriage was transformed from one of acrimonious finger pointing to a partnership based upon mutual respect and honesty.

Not all infidelities are so easily dealt with. Some couples do decide to move on and find other partners. But regardless of the outcome, getting away from the blame game creates more conscious choice and the freedom to create your life on your own terms. It removes the shame and showers us with options instead of ultimatums.

How does this work?

The first step is to see “blame” as a falsehood. There is a reason the word “blame” rhymes with “shame.” They are kissing cousins! We all need to take responsibility for our actions, but that is a far cry from blaming, condemning, accusing, indicting, pointing the finger, and incriminating either ourselves or others.

There is little if anything to be gained from a punitive approach to misdeeds. Positive change is much more likely to result from taking responsibility for our part while asserting our true feelings and our needs. For the most part, this is not something we learn in our formative years. Instead we are taught to find fault, assign blame and enforce punishments. And that approach creates dishonesty, distrust and dis-empowerment.

If, however, we can learn to take responsibility for our part, we can move beyond “blame” into an opportunity to experience more personal power!

This was not easy for me to understand at first. I really wanted to escape feeling responsible because it almost always led to feelings of shame and low self-esteem. But over time I came to realize that when I focused on my part, I was actually focusing on the one thing I have control over: me! Redirecting my focus from my attempts to justify, excuse or explain myself to how I could do things differently in the future really put me in the “driver’s seat” of my life. I was no longer a victim but rather someone coming from choice who is fully empowered to direct my life.

The effect that this shift in perspective has on our relationships with others is enormously positive. If we show up to take our fifty per cent (or 20 percent, 10 per cent, etc.), the other person is more likely to claim their part as well. And even if they don’t, you won’t care as much as you might think. The personal satisfaction which results from taking responsibility for your part is far more empowering and freeing than blaming anyone. You will have more joy and beauty in your life, and far healthier relationships, if you are no longer controlled by the “blame game.”