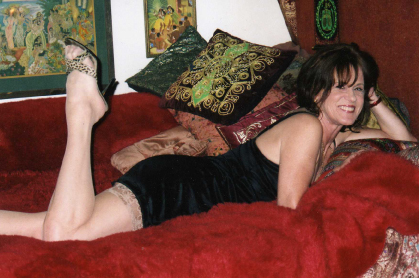 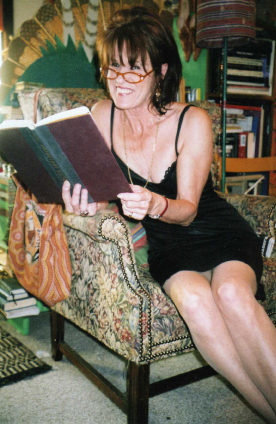 I am Lilith, Grandmother of Mary Magdalene.

I am Lilith, whose sexual fire was too hot for God.

I am Lilith, The First Woman, who chose the rage of exile over the cancer of servitude.

I am Lilith, Mother to the motherless.

I am Lilith, whose blood covers the moon.

I am Lilith, standing on owl’s claws at a woman’s crossroads.

I am Lilith, The Great Whore, whose charm lured the warrior into Her Goddess’s final warmth.

I am Lilith, whose serpentine tongue caused Eve to laugh and pick the apple.

I am Lilith, Revolving Sword of Flame—scorching hypocrisy from truth’s white bones.

I am Lilith, free-moving in the Wilderness.

I am Lilith, spirit of night and air.

I am Lilith, in whose dark caves transgressors find sanctuary.

I am Lilith, seducing through the Mystery of Adornment.

I am Lilith, whose whispered endearments steal the heart away even from the thoughtful.

I am Morgan le Faye.

I am the Queen of Shayba.

My hair is black and I am ‘dark but comely.’

My hair is red and my skin is ivory.

I am Eve’s big sister.

I am Lilith, when I dance—dust becomes silver, stones are made of gold.

I am Lilith, Mother to the motherless.

I am Lilith, whose sexual fire was too hot for God.

I am Lilith, living in the shadow, waiting—for you.

Cosi taught me that sex could be a sacred gift, that sacred prostitution could be a spiritual calling. She reframed how I related to my own genitals so that I was able to reject the dominant culture’s concept of women’s bodies being “used” or worse, “used up,” and step into the truth of women’s vulvas – that they are the seat of life and creation which is defined by inspiring complexity, powerful muscles and immense pleasure.

Cosi taught me that women’s bodies were the original religion – that sex was the original form of worship. Tracing the roots of human consciousness and culture through the ancient Sanskrit, historical documents and ancient mythologies, Cosi used her masterful storytelling skills to welcome us into a world where women and men can profoundly appreciate each other and the sex we may choose to share.

Cosi Fabian left this plane on July 21, 2021. I will always be grateful for the powerful ways she changed my relationship to myself, my body, my sex, my years as a sacred prostitute courtesan and the very core of my feminism. I hope you come to love her too.

Below is a 2005 interview in which Cosi Fabian shares how she left her career as a war correspondent and became a sacred prostitute and mentor and teacher to so many:

Cosi Fabian was a scholar, a journalist, an author, a poet, a masterful storyteller and a force to be reckoned with. Her fierce courage would take her to Salvador in the early 80’s as a war correspondent working alongside Richard Boyle. Later she would forged revolutionary perspectives on the sacred feminine and the sacred masculine based upon her in-depth historical and mythological research. Cosi served as an advisor and a lecturer for The Women’s Spirituality Programs at The New College of California and she was a frequent guest on radio programs such as NPR. She shared her wisdom and wit on various television shows including ABC’s 20/20 and the Canadian SexTV. Her paradigm shifting teachings touched many lives through major media, books, workshops and lectures. Cosi is also a contributing author for Whores and Other Feminists (Routledge 1997) and she wrote the powerful forward for Lilith’s Fire: Reclaiming Our Sacred Lifeforce (Universal Publishers, 2000).