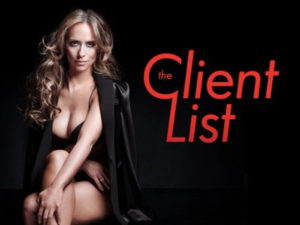 A brand new television show is airing on Lifetime Television about a likeable wife and mother who resorts to providing “happy endings” to her massage clients in order to support her family and avoid foreclosure on their mortgage.

Unlike Showtime’s Secret Diary of a Call Girl, which is based upon research scientist Dr. Brooke Magnanti’s life as an escort while completing her doctoral studies, Lifetime’s The Client List starring Jennifer Love Hewitt is apparently fictional. While Secret Diary of a Call Girl is produced in the UK, The Client Listoriginates in the USA and targets a predominantly female viewership.

But what is perhaps most surprising is that this latest entry in sex work as television entertainment portrays both the reluctant prostitute and her clients as average, one might even say normal, human beings. Gone are the stereotypes of drug addicted, incest surviving, man-hating women servicing hateful and domineering men who have lost all respect for women.

These stereotypes are so common they go unchallenged in the culture and continue to wreak havoc in the lives of the very real people who work for pay and pay for play in the sex industry. Instead, we are treated to characterizations which reveal affection and meaningful connection between Jennifer Love Hewitt’s character and her mostly male clients.

The premiere episode even features a tearful exchange between Riley Parks (Jennifer Love Hewitt) and the wife of a male client. While the distraught wife warns Riley to stay away from her husband, Riley reaches out with that heart of gold assuring the jealous woman that her husband is still in love with her.

Is it by accident or design that the show’s producers created a scenario where our heroine prostitute lends her wisdom and compassion to help mend a marriage? For those of us who have worked in the sex industry, we know this happens more often than outsiders would ever suspect.

Public perception casts prostitutes as a corrosive influence on love, romance, marriage, and family. But what if professional sex functions to support marriage and the family? Can we imagine sex work which heals and empowers?

What if the people getting paid for sexual services are truly service oriented? What if they are gifted with an unusual capacity to nurture and attend to the emotional and sensual needs of others?

This normalization of prostitution is bound to outrage some viewers. In fact, just today Massage Therapists Against The Client List petitioned the show’s producers to stop production of the program. the group’s premise is that The Client List perpetuates popular stereotypes of massage therapists engaging in “inappropriate sexual contact.”

While I understand the massage industry’s interest in preserving the reputation and good standing of their profession, it is a sad commentary on our cultural norms that almost everyone wants desperately to disassociate themselves from sex workers. Sex workers are simply people who get paid to provide a service which is more personal than most and far more palatable than many nursing jobs.

After schoolteacher Shannon Williams’ arrest for prostitution in 2003, I was invited onto FOX’s From the Heartland to debate a most unusual topic. The question posed was a disingenuous “should prostitutes be allowed to be schoolteachers?” Former Congressman John Kasich (now Governor of Ohio) was of course adamantly opposed to the idea. Even to a veteran sex worker rights activist like myself, the juxtaposition of schoolteacher and prostitute felt blatantly contradictory.

But is it possible that logic and reason have taken a vacation on this topic? Is it fair to ask ourselves to suspend convention and entertain the idea that once reflexive shame is removed from the equation there isn’t much to dissuade us from accepting that any profession which practices compassion and sensual healing is just what the planet needs more than ever?