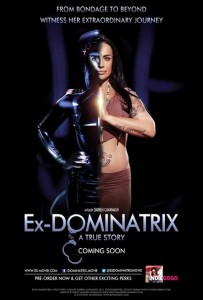 Ira van Damm worked under the professional name of Mistress Lucrezia in the United Kingdom for several years but one day her whole world came crashing down. One of her clients died during a session.

As is often the case, the arrest made headlines and the media rushed to judgment. But what actually happened has been a bit of a mystery, until now. The whole story will be revealed in a brand new documentary scheduled for release later this year.

Ex-Dominatrix, a True Story is a film by Darren Cavanagh, who has also worked on films like Kill Bill and The Hunger Games.

And while this aspect of Ira van Damm’s story holds great interest for me, it may not be for the reasons you might suspect. I am deeply interested in how her client’s death adversely impacted her health, and led to her moving to India, healing herself and beginning a new life as a yogini and yoga teacher.

Transformation is something many of us seek. We want to be better, be more, and feel expanded into our full potential. Yet life’s setbacks can sometimes make it difficult for us to continue to believe in ourselves and take the steps that will produce positive change.

As Ira says in the film, “What I hope people will get from this documentary, is that it gives them the courage in their lives to move on when they hit a set back. Because a set back is sometimes necessary to open your eyes and see that you have other abilities. Because sometimes we get stuck into what we are used to and we forget that it’s something that doesn’t make us happy. If we are unhappy we keep dreaming about changing it and complaining about our life but we don’t do anything about it. And sometimes you need to bang your head against a rock to wake you up to see that it’s time for something else. You have to find the strength inside you to do something with your life. I can advise everybody, it’s much better than killing yourself”…she giggles.

I was afforded a rare opportunity to interview Ira van Damm via email exchange with the film’s producer, Darren Cavanagh.

I don’t think she has had problems with her students but when it doesn’t have to be shared she doesn’t share it. The first years before we were filming in Goa she didn’t tell anyone about her past life. There was no need for her as a yoga teacher to share her past with her students as it wasn’t yoga related.  When she did tell some students it did shock some of them but they didn’t think less of her as a teacher. I think she keeps it silent to get appreciated for what she is doing now without the influence or opinion people might have from knowing what she had did in the past.

Does Ira have regrets about her past profession? Or does she perhaps feel shameless about it? Maybe even see it as a strength?

Are there any skill sets from her past profession, which Ira currently uses in her new profession?  In other words, does she view her life as a natural progression where what came before helps to inform and shape what comes after?

What I find most evocative about this film is the telling of Ira’s story in a holistic way which neither denies nor apologizes for her past profession while embracing and celebrating her new professional and spiritual path.  I hope that others will feel inspired to see their own lives without the filters of shame. We are better able to learn from our past when we ditch the shame. And it does wonders for our ability to live fully and joyfully.