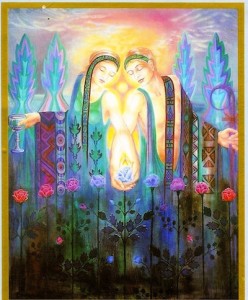 More and more we are discovering just how interconnected all life on our beautiful and increasingly small planet is. Smog emanating from China is carried by the winds all the way to the western United States, where it causes nearly as much air pollution as automobiles. The decimation of rainforests in South America and Africa disrupts the entire planet’s hydrological cycles, and lowers atmospheric oxygen levels everywhere on earth. The list of unexpected ripple effects is endless, really.

As a sexologist and relationship coach, I spend a lot of time thinking about how human sexuality and relationships affect the planet. That may not be intuitive to most people. But if you think about it, it might begin to make more sense.

For instance, a lot of people have been taught to feel shame about sex. And that unfortunately can lead to a lot of sexual activity without a lot of thought. The basic biology still drives us toward sexual behaviors, but we are not using our big brains to make wise decisions about that sexual behavior.

Sexual shame can cause us to have sex without taking precautions to avoid sexually transmitted infections and pregnancy. The personal results are, of course, well known to most of us. But what impact does that have on a global scale?

Sexually transmitted infections including HIV are more prevalent in areas where there is little or no sex education. The Centers for Disease Control’s HIV Surveillance Report maps the prevalence of HIV by state in the United States; and not surprisingly higher rates of HIV infection occur in those states that do not offer comprehensive sex education. The correlation between comprehensive sex education and transmission of HIV occurs on a global scale as well.

Lack of comprehensive sex education also leads to higher unwanted pregnancies. This is one of the reasons why the world’s least developed countries, those which can least afford their populations to grow, are facing a doubling, or even a tripling of their populations by 2050.

One of the biggest obstacles to comprehensive sex education is sexual shame. That sexual shame can take many forms, including parents having difficulty discussing the topic in an open and loving way, and parents being afraid that their children will engage in sex if they know how to protect themselves from disease and pregnancy. And sexual shame can also take the form of religious taboos regarding a variety of sexual behaviors including premarital sex and homosexuality.

A shame-based culture makes it difficult for people to learn more successful ways of relating to each other and to our planet. Shame makes it impossible for us to face our feelings because it cuts us off from ourselves and makes us act unconsciously in important portions of our lives. We can’t solve problems we can’t talk about.

Our sexual shame prevents us from seeing the sexual and emotional realities of other sentient beings. We turn away from the bonobo, an ape that could serve as a wonderful example of sex as an antidote to our mean world, if we were not afraid to look at their pansexual ways.

In my next article, I will tell you more about the bonobo and what we might be able to learn from this intriguing animal. They seem to avoid many of the problems arising from competition, dominance and hierarchy with an unexpected solution: a novel approach to sex.

Can healing sexual shame shift human culture toward a healthier relationship with the environment?  I believe so. If we can move past our sexual shame and embrace sexuality, not only as a healthy part of life, but also as an important tool for shifting our perspective from one of competition to one of cooperation, we might be able to move to a global model of sharing resources and solutions to our energy needs.

Sex as a solution to global climate change? Exactly.  Check out my next blog to see how I think that could work.

Veronica Monet, ACS, CAM is a Certified Sexologist and Relationship Coach who teaches The Five Steps to Exquisite Partnership. If you want help healing your shame, please email her at Veronica@TheShameFreeZone.com